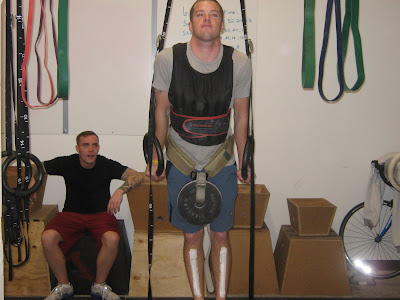 Great Article on How to Chalk and How Not to Chalk from CrossFit Invictus out in San Diego,California

It began as an off-handed joke. It progressed into semi-serious statements. It evolved into full-blown declarations.
“Chalk is overrated.”

I used to be pro-chalk. I used to believe dusting up my hands to a coat of pearly, bleached white would ensure victory in my workouts and help bring about improved performance. I would clap my hands and kick up white dust to provide self-encouragement. My “breaks” would give me an opportunity to re-chalkify. I avidly thought chalk was the reason I could do more pull-ups. I thought chalk was the reason I could pull more weight. Chalk was the driver to help me press more weight overhead. Running with chalk on my hands would get me in and out the door faster. Chalk was the hero of my work out. Chalk drove me to success.

Then something happened. My hands started tearing more. I spent more and more time letting my hands heal. Chalk slowed me down from the constant re-application. A friend gently told me I was using chalk as a crutch to rest more. After hearing that, I tried my hand at a few benchmark workouts while forgoing chalk. My times improved. I tore my hands less. I attributed my success to giving up chalk. Thus, this began the No-Chalk Era.

I used to be no-chalk. I used to think chalk was unnecessary. I would avoid using chalk at all costs, even if there was a legitimate need for it. I thought chalk was something newbies used as a means to sneak in more rest. Chalk made people tear and bleed. Chalk was a downright detriment to performance gains.

Then something happened. With sweat coming down my forearms to my wrists one day, I was performing muscle-ups in my workout. Just another set until I was back out the door. Just another rep. Roll my shoulders over the rings, dip, and lock out. And then my right wrist slipped and my armpit met the ring. I lost control and let go of the left ring. Bless my moderate reflexes for saving me from any permanent damage to my limbs. After some rapid introspection, I chalked up my wrists (and just my wrists) and finished my workout. But, I began to re-think my position on chalk. Thus, this began my most pragmatic era, the Some-Chalk era.

Chalk is great when used responsibly.

This means using the minimal amount of chalk necessary to help with certain exercises–mostly pulling exercises. Some people, however, take chalk-use to the extreme and use it for EVERY exercise, which is completely unnecessary and creates additional clean-up work. Is it really necessary to chalk up when doing push-ups? How about squats? Push presses? The fact is, some people view chalk not as a tool but as a habit. These are the ones creating a dust storm around them by over-chalking and then clapping their hands to get rid of the excess. This not only accelerates the consumption of chalk for those that genuinely need it, like those who sweat excessively, but it also simply annoys those around you. A crime scene is not a look we’re going for at the gym. I know the rebuttal is that we at CrossFit Invictus are not a globo-gym and chalk usage is one of the appeals for some people. But let’s be candid for a moment. If you don’t get sweaty hands, how much chalk do you need to get through your workouts?

Chalk serves the purpose of drying hands to assist with grip issues. It is not magical fairy dust that will make your grip hulk strong. A little bit can go a long away provided you understand where the chalk needs to go. The only part of your hand that needs chalk is the part that will be in contract with the bar, ring, or other apparatus you are utilizing at that moment. The back of your hand does not warrant chalking. The next time you chalk up, understand where your hands are making contact. Take a bit of chalk and rub it in that area. You don’t need a lot, just a light coating. Take your other hand and rub it against the chalked one. Carry on with your bad self.

If you are part of the population that depends on chalk, let me present an alternative: wrist bands. You may see some people in the gym using them already. They are great for the primary reason of soaking up sweat that would otherwise run into your hands. Barring the obvious swagger you gain from wearing them, the wrist band will help control your chalk usage and possibly eliminate your need for it.

In closing, let me reiterate that chalk is a great tool when used responsibly. Over-do it and you run the risk of doing more damage to your hands than good, as well as annoying your fellow CrossFitters. Do yourself and your CF family a favor, use the chalk responsibly.

You Choose your degree of fitness… Remember Scaling is not defeating the purpose of the workout, but catering to your physical abilities…