VAGABOND NEWS: I would like to welcome, Kerri, to the Vagabond CrossFit Community and is another test subject for the new “ON RAMP” Program that I have put together for the new Vagabonds walking throught the garage doors…

VAGABOND SHOUT-OUTS: I would like to give a shout out to all the Vagabonds who performed the SNATCH-RUN WOD today, as they have worked hard at trying to perfect the SNATCH movement. It is amazing to see how far some of these athletes have come and how determined they are to learning a new movement. We have been practicing repetition after repetition with the snatch movement, with incorporating the COACH B DRILLS and they have made leaps and bounds in their technique and form… Congrats to everyone in their improvement and shows that HARD WORK really does pay off!!!


“It all began with teenage body issues. I read health magazines, ate low-fat foods and tried to get more exercise. I wasn’t overweight, but I didn’t want to be. Although I was body conscious, the idea of fitness never came into play; I didn’t know any athletes and never participated in a sport.

When I was 15, I went to dinner at a relative’s house not knowing what was on the menu. The meatballs tasted a bit odd, but it wasn’t until after the meal that I was told it was venison from a deer my cousins had hunted and killed earlier that week. I was appalled! No, not Bambi! I decided at that point that if someone had the fortitude to kill, skin and butcher an animal, they had every right to eat it, but I couldn’t go through that process – I wasn’t tough enough. If I was not willing to deal with the blood and guts, perhaps I shouldn’t be eating meat.

Later that year, I decided to become a vegetarian, much to the chagrin of my family. They had no idea why I would want to go and do a thing like that. I believed that this was the best choice for my personal morals, the environment and my health. I had read about the carbon footprint of animal production and how it pollutes the environment with antibiotics and runoff. There was a ton of published information about how harmful animal products were to your health; what with all the cholesterol and saturated fat…who would choose to give themselves a heart attack? I took vitamins, steamed my vegetables and eschewed fat. I never even ate fast food (which was not a difficult task; back in the 90’s there wasn’t much in the way of vegetarian foods – even the McDonald’s french fries were cooked in animal fat).

College brought new challenges. To save money, I lived off of spaghetti. Lots of spaghetti. And bread. Cheap AND vegetarian! Even better, it was all fat-free! I woke up at 5 in the morning regularly to go to the gym, where I did my static stretching, weight circuits and cardio on the treadmill. I wasn’t fat, but I wasn’t fit either.

I continued to eat a vegetarian diet and stick to my gym routine throughout my twenties. When I had my daughter in 2000, I only gained 20 pounds through eating decent (though not Paleo) foods and exercising consistently. In fact, my labor was only an hour-and-a-half, and I credit that to regular exercise.

I took time off from my career to take care of my daughter, and ended up never going back to my field of Art Direction/Graphic Design (which was fine; I hated sitting at a desk for 12 hours a day anyway!). I worked at The Container Store managing visual efforts; unloading trucks, building fixtures, etc. It was physically demanding but rewarding, and it gave me the schedule I needed to help care for my child.

In 2005, I began working out with a personal trainer. I would work long, grueling shifts at The Container Store, then go to a pseudo-circuit training class for an hour. Breakfasts were Powerbars and coffee. Lunches would be half a loaf of whole grain artisan bread with a huge block of cheese and an apple. Dinners were up to a pound of pasta at a time. I killed myself at work and at the gym, and fueled myself on carbohydrates. Because I felt I deserved it, Fridays began to be reward days, with me eating half a take-out pizza then half a pan of brownies.

I was exhausted all the time.

About a year in with my trainer, he suggested I try changing careers again and becoming a personal trainer myself. I thought this ridiculous, especially since I had no athletic background – I didn’t know anything about fitness; why would anyone want to listen to me? Eventually, I rescinded, got certified and began working at the same gym with my (now-previous) trainer. I started doing two long, heavy workouts a day. At the time, I had a lot of stress in my personal life, and working out was my way of dealing with the pressure.

During this period, I got stronger, and I was building a decent amount of endurance, but I was dying physically. I stopped building muscle mass and my joints hurt. I got odd muscle twinges that got in the way of my workouts, and I was so tired I could barely function.

In 2007, my ex-trainer (now my co-worker) and I were introduced to CrossFit and received our Level 1 certifications.

I have no doubt that CrossFit saved my life.

I immediately dove into the CrossFit program 100%. Three days on, one day off. No more hours and hours of circuit training. My diet changed to a more Zone-ish approach, but I did not eliminate all grains (I still ate oatmeal for breakfast) or dairy. Within a few months, my ex-trainer became my business partner, and we left our gym to open our own CrossFit affiliate. It didn’t take long for CrossFit to completely change my exercise, my eating, my lifestyle and my career.

For a year-and-a-half, I followed HQ and was fairly successful. I was able to start the program strong enough to do Rx’d weights, but I had to learn pull-ups, handstands and other basic calisthenics. My very first “Fran” was under 8 minutes; my first max deadlift attempt was 225; my first 5k was twenty-four minutes. Progress was slow but steady for a while, but I had times where I plateaued, and even times where I backslid significantly.

When I started feeling depressed about my stagnant performance, I tried adding the Rippetoe strength program into my HQ cycles. I made some gains, but they disappeared as soon as I finished my three months experimenting with the extra strength work.

All this time, I didn’t think that maybe my nutrition could be negatively affecting my workouts. I Zoned judiciously, making sure I got enough protein (albeit vegetarian proteins, such as seitan, which is basically pure wheat gluten, and various overly processed soy ‘meats’), fats and carbohydrates. I thought those low-ca
rb, high-fiber tortillas were awesome, and regularly ate them with Tofurky slices and hummus every day for lunch (gluten + soy + beans…yikes!).

In January of 2009, I was encouraged to attend Robb Wolf’s nutrition cert. Since he was coming to Atlanta, I figured why not? I fancied myself a nutrition nerd and I wouldn’t even have to travel – awesome!

Again, a perfect example of how CrossFit saved my life. I shudder to think where my health and performance would be five, ten or even twenty years from now if I had not attended this cert. I had been shoveling grains, soy, beans, gluten and sugar in my system for almost two decades…where might my health be if I had continued on for several more?

I had been a lacto-ovo-vegetarian for eighteen years, but the night of the cert I went out and had steak for dinner. I switched overnight and completely to a Paleo way of eating. No grains, beans or dairy. Animal protein at every meal. LOTS of fat. (For those of you who are wondering; no, I didn’t have any digestive issues with starting to eat meat again. Absolutely none.)

So here’s where it gets fun. I started making progress in my workouts. Real, measurable and out-of-the-ordinary progress. Keep in mind I changed NOTHING but my nutrition. My training is always CrossFit HQ. For example:

Like I had said before, when I started CrossFit in 2007, I was already fairly strong. My first front squat attempt maxed out at 185 pounds. However, my front squat remained unchanged until March of 2009, when I hit 187 pounds. Two months later, I had a 200 pound front squat. (An increase of 13 pounds in four months)

One last lift to note is that my back squat has gone up 27 pounds this year alone.

Olympic lifts have continued a positive linear progression that does not appear as closely linked to diet.

A quick note about body composition: my body weight hovered around 145-150 for most of the past few years; I’m not sure of what my body fat was, but it was most likely around 16%. With the change in my diet, I quickly put on about 5 pounds, and today I weigh in around 160. Apparently, this was all muscle mass I was in need of – the last Bod Pod test I had was in early summer, and it determined I was approximately 7% body fat.

Even with the increase in strength and body weight, I have continued to see progress with my speed and metcons. This is huge for me, because historically, an increase in strength/size would directly correlate to a downturn in all things related to calisthenics, speed and general huffing and puffing performance.

Lastly, I want to make it clear that I do not go OCD with the Paleo approach. I do not weigh or measure my food, though I do try to combine protein, fats and carbohydrates in each meal (however, not in Zone proportions). Once every week or two I eat pizza. Occasionally, I have wings and beer. The vast majority of the time I focus on food quality (local, organic, humanely raised), but I refuse to stress about food. Making good choices most of the time works for me and makes it easy to pass on the same advice to my clients. I have yet to see frenetic obsession about nutrition produce any positive gains in a client.

This year has been a whirlwind for me. I was able to come in 3rd place at the Dirty South Qualifiers as well as place 14th female overall for the 2009 CrossFit Games, and I credit Robb Wolf and his nutrition cert for a good portion of those accomplishments. I believe that successful athletes, especially those of us over 30, are made from simple, high quality Paleo foods. Gluten, grains, beans and similar Neolithic foods have proven to me to be detrimental to health and athletic performance.” 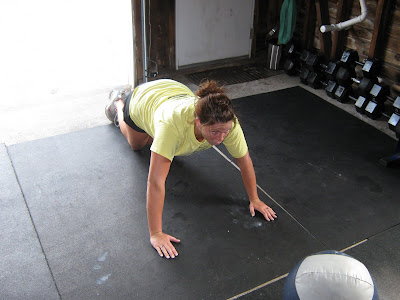 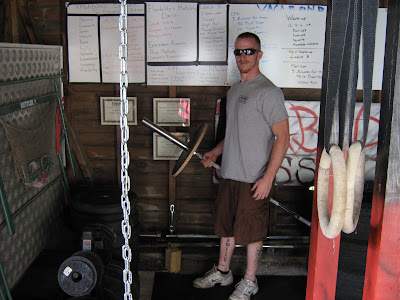 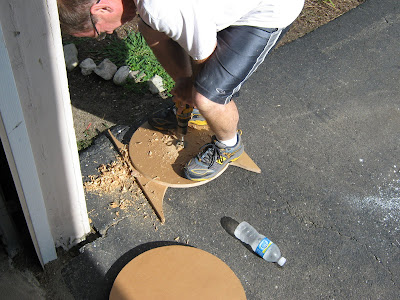 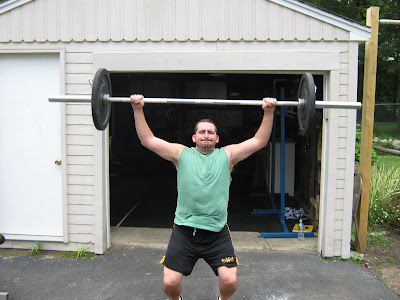 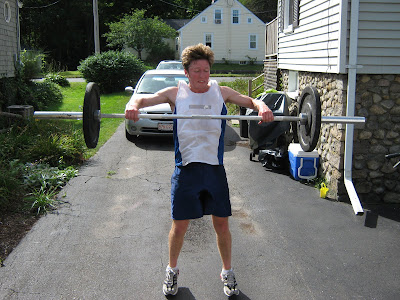 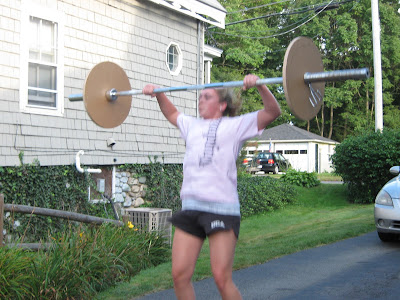