The CrossFit Games have started and they have already posted the first of 8 workouts on the CrossFit Games Webpage. It is a brutal 7.1 km terrain run that will break down the best of athletes. I watched some of the video from David Castro, and the run looks awful, but also inspiring. You have to really appreciate the athletes who participate in this event and really understand these are the fittest people on the earth. In two days, they will put themselves through eight grueling workouts, that will kill them physically and mentally. To look at this from hindsight, they are only two workouts from a decathlon, and I beg to differ that the CrossFit Games workouts will be harder than a decathlon. Check out the webpage and see the workouts…

Here are the first five events for the CrossFit Games in detail and how they will be performed. Itis amazing that these athletes will be performing FIVE workouts in one given day… My hats off to CrossFit HQ and the athletes particpating in these events..
As the affiliate teams prepare to compete today (the Stadium Workout setup pictured, with Jumbotron in the background), we announce the five events for Saturday’s Individual competition.

General Rules
1. The movement standards are typical HQ unless otherwise stated.
2. Each athlete will be ranked according to their time or score relative to the other athletes for that workout. Their final score for the workout will be equal to their rank.
3. The overall ranking going into each event will determine the reverse starting order for that event. For example, the athletes that win the first event will get to go last in the second event, while the athletes that come in last in the first event must go first in the second. The athletes in the lead (those with the lowest running total) after two events get to go last in the third event. And so forth.
4. After the second event, the bottom ten men and the bottom ten women (those with the most points) will be eliminated from the competition.
5. After the fourth event, the remaining bottom ten men and ten women will be eliminated from the competition. At this point, there will be approximately 55 athletes competing in Saturday’s final event (for each men and women).
6. After the fifth event, the 16 men and 16 women with the lowest total points will be invited to compete on Sunday. If by chance there is a tie for 16th place, the athlete with the best single placement in any of the five events will be awarded the invite.

Event 1 – The Run
The first event is a 7.1km run through varied terrain including both asphalt and extremely steep hills off trail. The athlete’s time will be electronically determined by a chip given to the athlete prior to the race.

Event 2 – The Deadlift
Heaviest successful deadlift completed lifting one rep every 30sec. Each competitor will begin at the first barbell, which weighs 315lbs for men and 185lbs for women. Dropping is permitted. The athlete then has 10sec plus any portion of the 20sec remaining to set up at the next bar, which is 10lbs heavier than the previous (so the second bar weighs 325/195). Athletes continue moving to progressively heavier bars until they fail. The athletes are ranked according to the heaviest successful weight lifted before failing.

Event 3 – The Sandbag Hill Sprint
The men will pick up two 35lb sandbags (loosely packed) and sprint approximately 170m uphill. The sandbags begin flat on the ground. The sprint is steep in places, with approximately 100′ in elevation gain over the 170m course. Women carry one 35lb sandbag for the same course.

Event 4 – Row / Hammer Stake
Row 500m
Hammer a 4′ metal stake into specially prepared, evenly compacted ground (women use a 3′ stake)
Row 500m
Details and standards will be given to the athletes on Saturday afternoon.

Event 5 – The Couplet
The two exercises are wallball and barbell snatch. The specifics of the workout will be disclosed on Saturday afternoon. We want the athletes to have the privilege of being the first to perform this exact workout.

MORE NEWS: The garage gym hours will be open from 8 am to 11:00 on Saturday Morning, as the Vagabond area will be used for pre wedding pictures for Melissa’s sister, Amy and her future husband, Shane. Congrats on tieing the knot and Best of Luck!! 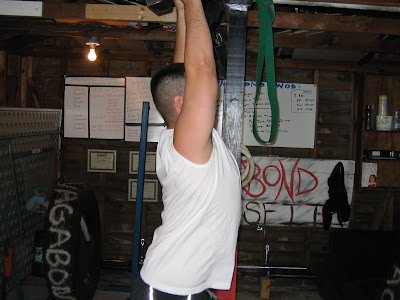 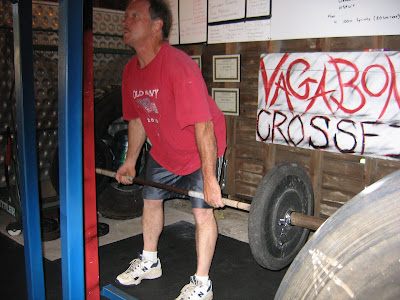 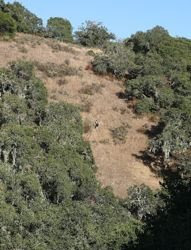 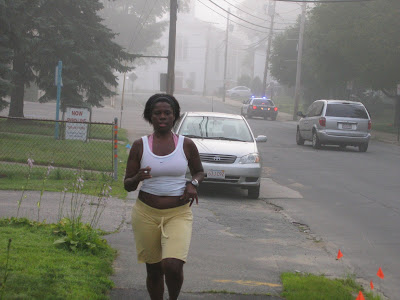