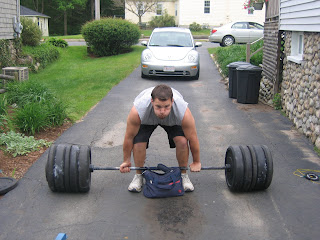 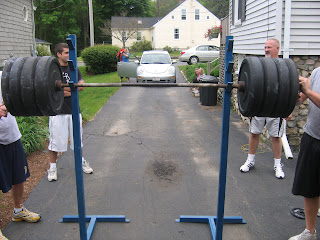 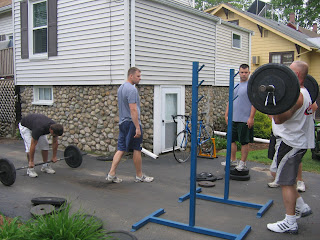 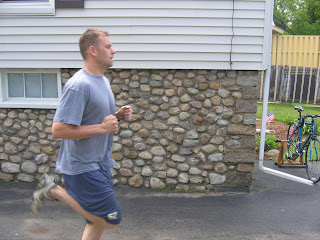 We will be hitting the workout called “Barbara” tommorow as our athletes recover from their first “CrossFit Total” workout, in which, was a complete success for everyone. It was amazing to see some of the scores that the guys posted. Everyone made huge leaps and bounds and saw all their lifts go up in every aspect. Some guys went up over 50 lbs in each of their lifts and were amazed to see their improvement within their strength. I was filled with joy to see their determination and dedication over the last month, and today really showed the worked that they put in over the last month. Everyone is pretty much on a Paleo diet now, and have seen vast improvements in their body type. Also, within their nutrition plan, they have seen vast improvements in their athletic ability. Almost everyone reached the “300 Club”, in their deadlift and squat, which I was very proud of them during their workout. Also, I would like to send a congratulations to Shane, who reached the “500 club” in his deadlift, which is an astounding amount of weight. He also reached the “1000” total score club in the “CrossFit Total”, which was his first try at this workout. Even the girls, who tried the back squat and deadlift for their first time in a strength workout, reached 135 lbs for 3 repetitions. Great Job Gals and keep up the good work. As I tell the guys, you do not have to concentrate solely on strength to see results in these types of workouts. They have been hitting workouts revolving around Met-Con regiments and have thrown in some strength workouts in the last month. However, they still saw crazy improvement and shows that CrossFit actually does work, when you concentrate on all ten aspects of Fitness. Great Job Guys and Keep up the Great Work!!

As I stated before, we will be hitting the workout called “Barbara”, in which, the Vagabonds will concentrate on pull-ups, push-ups, sit-ups and squats. It will be a great workout to see how far they have come in their pull-ups and will give them another taste of a Met-Con workout. Get Ready Vagabonds, for this will be a fun workout throughout the afternoon.

I have finally convinced one of our Vagabonds to try and implement CrossFit Endurance into his regiment. I talk to Ross about the Pose Running Method and the basics of mechanics behind this type of skill. I went over with him the drills and skills that we will be learning throughout his new journey down this new type of workout. However, I stressed to him the importance of that CrossFit is his program and that CrossFit Endurance will be the supplement. Without CrossFit as his number one training regiment, then CrossFit Endurance would be useless in his training. I trained him in the basic fundamentals of Pose Running. I put him through the basic drills, that would improve his running form and also prevent him from further injury. He did a great job and put him through his first CrossFit Endurance Workout. He did a great job, but realized that this is not your typical type of running regiment. We did a 8 minute workout, and he was smoked. I told him we will be straying away from LSD running, which is Long, Slow, Distance training, and will be concentrating on anaerobic training, which involves, short, high intensity workouts that will both meet his needs in anaerobic and aerobic capacity. Anaerobic training is by far the best way to train for any running race, and improves your ability in running, building lean muscle mass, improving VO2 MAX, improving aerobic ability, decreased body fat, increased strength, increased power, increased speed, and increased cardiovascular function. The only benefits of aerobic training is the following, increased cardio function and better fat utilization. However it decreases your muscle mass, decreases your strength, decreases your power, speed, and testosterone levels. Now, if you were a regular person, Which Aspect Would You Rather Train In? No Brainer, Right?