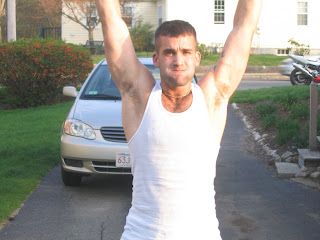 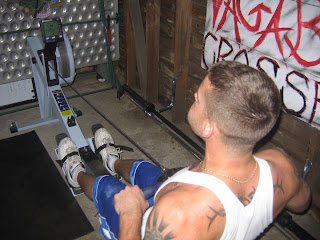 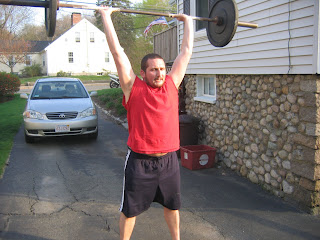 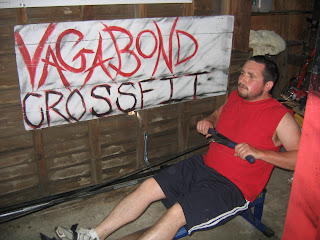 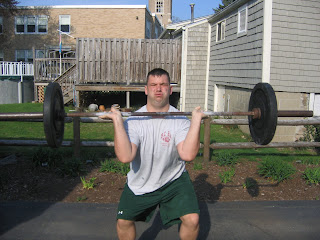 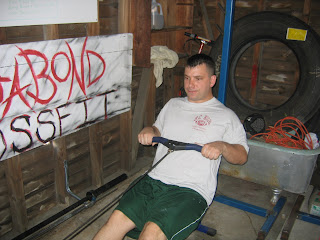 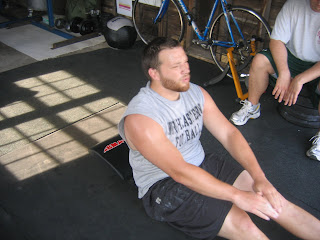 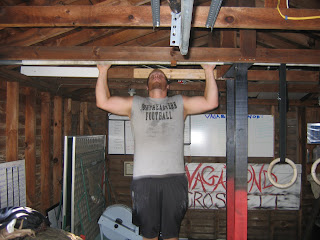 Killer WOD:Today the boys and girls hit the workouts hard and never looked back. Couple of the guys hit some milestones and performed their first unassisted pull-ups and felt the burn after the workout. They realized how different the workout is when you start doing some real strict pull-ups and how more strenuous it is on yourself. However, the guys performed great and showed some great strides in their Crossfit regiment. It has been about a month since they started and have made real gains with their athletic performance over that time period. Congratulations guys on a great workout.
NEWBIE REPORT: I would like to welcome one of my closest and dearest friends to Vagabond Crossfit, Shane. Shane’s background is in football were he excelled as one of the top recruits out of high school in New England. He played at the dominant football program of Xaverian Brothers High School and was considered one of the top fullback/linebackers coming out of high school. He pursued his football career at Northeastern University, were he excelled as a starter for three solid years. He also dabbled in a little professional football, in the Arena Football League for a year, but called it quits after a very successful tenure as a football player. I am happy to have Shane aboard due to his intelligence and physical prowess in athletics. I know he will perform well and will probably break every record in the strength department soon enough. Welcome Aboard Shane and Good Luck!!
As I said before, the guys performed great today, b
ut Celine, are top women in the Vagabond World put forth a great effort in her workout. She finally got on the rings and performed a deadly amount of Ring Rows during her workout.
SKILL OF THE WEEK: Pull-Up Progression Skills: Every week at Vagabond CrossFit we will concentrate on one skill that I feel is very important to the success of our athletes. I feel Pull-ups are very important to the scheme of CrossFit and I believe many other CrossFitters would agree. I have broken down the Pull-Up Progression Scheme into five parts. We will focus on each movement, were the athletes physical ability is at this point. Here is the breakdown of the Pull-Up Progression Scheme:
1. Ring Rows
2. Jumping Pull-ups
3. Assisted Pull-ups
4. Strict Pull-ups
5. Kipping Pull-ups
I believe through this week of concentrating on this skill, we will see vast improvements in the men and women abilities to perform these skills. With each repetition and movement, the people of Vagabond CrossFit will make huge strides and will reach their goals of performing a correct pull-up. They will see huge bounds and leap forwards with this concentration and will see their times dramatically drop due to this week’s skill work. Good Luck to everyone and Give it Your All!!
Vagabond CrossFit WOD’S
Shane WOD-“Tabata This”
20:10 x 8 rounds
Pull-ups
Push-Ups
Sit-ups
Squats
Shane did a great job and was the first victim of “Pukie” today within the Vagabond Walls. I am sure it will not be the last, but with time he will evolve into a Superior athlete with this regiment.
Celine WOD-
3 Rounds for Time of: 21-18-15
250 M Run
Ring Rows
Push Press- 25 lbs
Time- 8:32
This was Celine’s first time with weight and did a great job throughout the workout. Great Job Celine and great job hitting a milestone on the rings.
Vagabond Main WOD-
Three Rounds for Time of: 21-15-9
500 m Row
Thrusters
Pull-ups
Times:
Ham- 12:00
Chris-13:44
Kevin-16:42
This was the first time for the guys performing the movement called a Thruster. It finally showed the guys that all these fundamental movements that they have been practicing will lead to other movements. The Thruster consists of a front squat into a push press, which is two of the nine fundamental movements. They all busted out their workouts and most importantly hit some real milestones in their pull-up progression scheme.