There is a school of thought mainly found in the competitive Weightlifting community that doing Oly lifts at high reps and high weight “for time” is a horrible way to train. This belief is partly based on the relatively high complexity of the movements and the relatively low level of training of most CrossFit athletes.

Like many people who start CrossFit my journey started with reading the main site every day, perusing the hundreds of articles and videos and eventually finding the nerve to attempt some of this stuff at my GloboGym. I probably did CrossFit for about a year before I even found a box within driving distance. Up until that point, I was “self schooled” which is a nice way of saying I had plenty of time to practice my shit form on my own! If you’d like to give your thoughts on the picture perfect technique in the photos below, please post to comments!

Now back to the original question – is it ill advised to do high-rep Olympic Lifts for time in CrossFit workouts. Well, my personal opinion is…”that depends”. There are a few simple rules that I would give any true novice before even thinking about doing a WOD like Grace or Isabell Rx’ed.

1. If you’re doing a high rep met-con with a weight that is 85% of your 1 Rep PR, it’s way too f$%^ing heavy!! I’ll never forget a WOD I did at a CrossFit box I was visiting in Michigan. It was Isabelle and Grace back to back….with Squat Snatches and Squat Cleans!!! So, at that point I really didn’t even know what my 1 rep max Snatch was but I knew that 115 would be really tough and 135 would be a mess. So I did 115 pound power snatches followed by overhead squats and finished the WOD without incident. Meanwhile there was this kid trying to do the WOD at the rx weight and falling on his ass every other rep. After the WOD I went over to him and said “ummm…props dude for doing the WOD Rx’ed”. He gave me this tough guy look and said “I DON’T SCALE!!”. Whatever dude, you also took 20 minutes to do a 5 minute workout and almost dropped a barbell on your head!!

2. Slow is fast. What I mean by this is that sacrificing 1/10 of a second to dial in your form will make each rep easier. You will not get gassed as fast and more important, you are less likely to get injured.

3. Chest up, back straight -ALWAYS! When you get tired, there is a great tendency to get lazy through your core and let your chest drop as you lower the weight (like the guy below). Make sure to lower your hips and push your chest out before each rep. 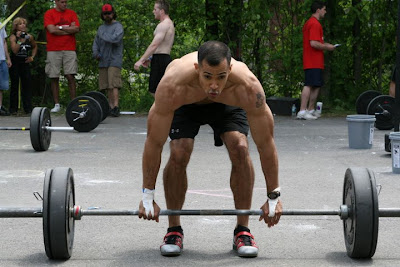 4. Finish each pull aggressively. In the Snatch, this means receiving the bar overhead with arms locked out and active shoulders. In the clean, this means snapping those elbows through to avoid the barbell crashing onto your shoulders or wrists. 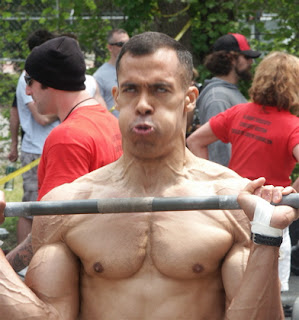 5. “When the arms bend, the power ends”: Coach B’s favorite saying. When the weight gets heavy, there is a great tendency to want to “gorilla” the weight up by pulling through your arms rather than using the speed of the hip drive in the second pull. Instead think about doing an explosive jump followed by an aggressive pull through your shoulders to create the upward momentum on the barbell. 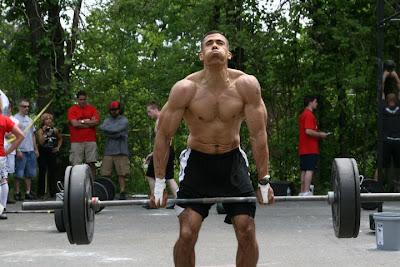 So to sum it up – if you’re new to the Olympic lifts make sure to go light until you develop some consistency of form and consider the points above the next time you do them in a CrossFit WOD.