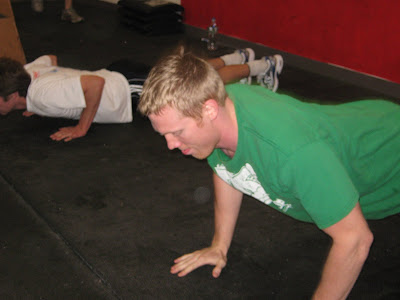 I. Why Squat? (Courtesy of Greg Glassman and CrossFit Southie Post):
The squat is essential to your well-being. The squat can both greatly improve your athleticism and keep your hips, back, and knees sound and functioning in your senior years. Not only is the squat not detrimental to the knees it is remarkably rehabilitative of cranky, damaged, or delicate knees. In fact, if you do not squat, your knees are not healthy regardless of how free of pain or discomfort you are. This is equally true of the hips and back.

Most of the world’s inhabitants sit not on chairs but in a squat. Meals, ceremonies, conversation, gatherings, and defecation are all performed berefit of chairs or seats. Only in the industrialized world do we find the need for chairs, couches, benches, and stools. This comes at a loss of functionality hat contributes immensely to decrepitude.

On the athletic front, the squat is the quintessential hip extension exercise, and hip extension is the foundation of all good human movement. Powerful, controlled hip extension is necessary and nearly sufficient for elite athleticism. “Necessary” in that without powerful, controlled hip extension you are not functioning anywhere near your potential. “Sufficient” in the sense that everyone we’ve met with the capacity to explosively open the hip could also run, jump, throw, and punch with impressive force. Secondarily, but no less important, the squat is among those exercises.

II. Dynamic Mobility Warm-Up:
Junkyard Dawg Warm-Up x 30 seconds on/15 seconds off x 4 sets
Shoulder Extenions(Arm Bar Hold Behind Neck)
Hip Extension/Flexion(90 Degree Quad Stretch)
ITB Stretch(One Leg Over the Other)
Lacross Balls(Shoulder Openers)
Box Flexion/Extension(Jerk Position)
III. Skill Transfer Exercises(Snatch Variation):
Up and Down
Elbows High and Outside
Muscle Snatch
Snatch Drop
Snatch Land
IV. Skill Work, Olympic Lifting and Raw Strength Workout of the Day:
A. Handstand Preparation Skill Sets,
*Advanced: Handstand Push-Ups x AMRAP x 4 sets*
*Intermediate: Abmat Handstand Push-Ups x AMRAP x 4 sets*
*Beginner: Handstand Holds x AMRAP x 4 sets*
B. Max Snatch, work up to a 1 Rep Max for Snatch, Split or Squat Allowed
(No More than 6 Attempts, and 3 Failure in a Row will terminate your working sets)
C. Back Squat, 5 sets of 3 reps
*Compare to February 25th, 2010, March 4th,2010, March 11th, 2010, April 7th, 2010, and June 18th, 2010
*High Bar Back Squat is recommended for the Back Squat, but Low Bar Back Squat can be performed if this is what you are comparing*
*High Bar Back Squat is essential to Olympic Weightlifting because it works the quadriceps predominantly and this is what we use heavily in olympic lifting.
Post Number of Reps and Weights Used to Comments.