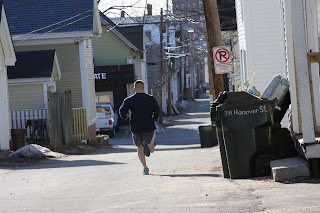 TJ- 7 Thrusters /7 Pull-Ups/7 Ring Dips/ 7 Box Jumps-
Rounds- 7 and 7 Thrusters
This is a Great Score for someone who has just begun doing Crossfit WOD’s. TJ has come a long way in the last month and has really impressed me with his determination and willingness to learn the movements. I am here to guide people along and show them the correct way to perform certain movements. Crossfit is based on Constantly Varied Movements and never performing movements that do not benefit independent living, meaning do not do bicep curls or leg extensions because you do not do those movements in every day life.
Matt- First 6 fundamentals of Crossfit-
Air Squat/Front Squat/Overhead Squat
Shoulder Press/Push Press/Push Jerk
Matt came too me with the concept of being challenged with workouts. Matt is a kid who is in great shape and has a nice physicall frame. His background is with wrestling and football. I know he has some great endurance, especially, with wrestling as a background. We started off with air squats and the first 3 fundamental movements of Crossfit. He struggled, but through the first hour he progressed and started to notice the change in his physical capabilities. Today we worked on the Shoulder Press and Push Press, which he picked up very easily. However, he struggled with the Push Jerk. We worked for almost 30 minutes on the Push Jerk. Finally, at the end he forced a violent dip and caught himself in the fall and pulled off the proper way to execute a PUSH JERK!! It is amazing to see the postive effects that Crossfit has on people. I myself a avid triathlete and competitive runner with races over 10k have seen vast improvements in my weaknesses of gymnastics and olympic lifts(with the help of the Firebreather they call SAMMY at Crossfit New Hampshire).
One more thing:
Crossfit New Hampshire will be mentioned many times during these posts because they have helped over the last 2 months become a better competitor and athlete in Crossfit. I have made huge strides in rings, handstand push-ups and olympic. One example is that I can almost pull 400 lbs on my deadlift and still run a half marathon in a time of about 1 hour and 36 minutes. The number one ideal I have got from Crossfit is you do not have to be good in one aspect of fitness, but you can  excel in all Ten aspects of Fitness, which we call the TEN ASPECTS OF FITNESS!! Crossfit makes you a competitor in every movement, fundamental, and athletic ability that a person can do. Crossfit will make you stronger physically, but also mentally, which is a key component to fitness. You have to have confidence in what you are doing and Crossfit makes this possible.